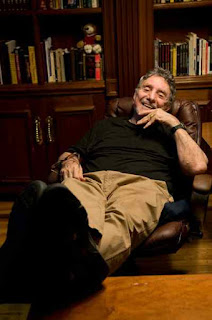 While taking a theology class at Georgetown University in 1949, William Peter Blatty heard about an extraordinary case of diabolical possession involving a 14-year-old boy in nearby Prince George’s County. The story stuck in the back of his mind. Two decades later, Blatty secluded himself in a cabin near Lake Tahoe and tapped out a novel on a green IBM Selectric about a 12-year-old girl who became possessed by a demon. He called the novel The Exorcist.

Topping most lists as the scariest movie ever made (and the scariest book ever written), The Exorcist not only made Blatty a star, but opened the door to a whole new generation of horror films, a sub-genre that could be called the “Supernatural Thriller,” the likes of which today are reflected in modern hits like “The Exorcism of Emily Rose,” “The Conjuring,” and the Paranormal Activity franchise films.

Blatty also achieved something else with The Exorcist that in the early 1970s was considered countercultural, if not downright heretical. He made evil a tangible thing. He personified it. It was something that was real, that was intelligent, that was cunning. Yet it could be confronted and overcome. By religion, of all things! This flew in the face of everything the pop psychology of the time preached, that the concept of evil was outdated, irrelevant, and, if anything, was just a “disordered psychoses” appearing in a few unfortunate individuals.

Blatty died on January 12, 2017, at the age of 89, after a short battle with blood cancer. He was a lifelong Catholic, albeit one who struggled with his faith, like so many of us. To honor his memory, here are a few interesting facts about the man who changed the landscape of cinematic horror.