Possessed Dolls Get Their Own Airplane Seats 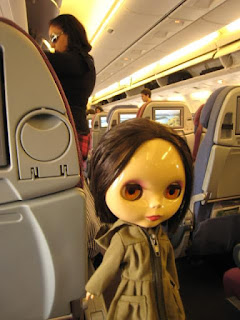 Here’s one more thing fearful flyers can now worry about: sitting next to a possessed doll. Okay, so it’s something that really just patrons of Thai Smile Airways have to deal with. But still . . .

According to an internal memo issued by the airline, as long as a ticket was purchased for the doll by its owner, the doll is entitled not only to its own seat, but snacks and drinks as well. The dolls must also buckle up during take-offs and landings. Well, duh.

So why is this even a thing? It seems that life-like dolls known as Luk Thep, or Child Angels, have become wildly popular in Thailand after several celebrities raved about the benefits of owning one of these darlings. Said to possess the soul of an actual child via a “spiritualization” process, a Luk Thep doll will supposedly bring good fortune to an owner who treats it well – like buying it fashionable clothes and feeding it tasty treats. And apparently taking it on airplane rides.

It might sound creepy at first, but when you think about it, sitting next to a well-behaved, quiet-and-minding-its-own-business possessed doll can’t be worse than sitting next to a crying baby or the guy who’s coughing and sneezing all over the place. Maybe it’ll even share its peanuts with you.

Photo credit: "Where's My Seat" by Suedehead, licensed under CC BY 2.0.