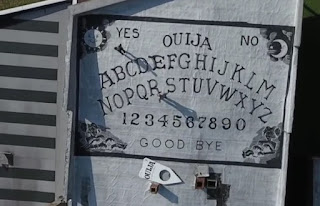 This is the rooftop of the 130-year-old Grand Midway Hotel in Windber, Pennsylvania. Owned by film maker Blair Murphy, who lives there with his girlfriend and baby girl, the hotel is not in operation but rather is open to guests on an invitation-only basis. The Grand Midway has been featured on various television shows and in books for its reputed haunted status, so when the offer came around to buy the property a few years back, Blair--who had always had an interest in the paranormal--jumped at the opportunity.

"It has been one fantastic adventure," said Blair in an interview with Guinness World Records, noting that he and his guests have experienced many strange things at the hotel. But it was when he held a Ouija board session there that the activity really kicked up.


“Things flipped out throughout the hotel.  Energies were swirling.  Guests were getting completely freaked out,” says Blair, “it seemed to kick things up into an entire new level of paranormal activity.  We were seeing floating people and hearing voices and even the hotel pets were flipping out and reacting to unseen forces. Our dreams were pretty wild.  And it wasn't just us.  Other longer-term hotel residents were saying ‘there is absolutely something going on here’ and having their own middle of the night weird encounters.”

For most people, that would have been more than enough reason to pack up and move a thousand miles away. But for Blair, it actually inspired him to make the hotel more spooky by constructing the world's largest Ouija board on the roof, so big, in fact, that it's visible from Google Maps.

“The hotel roof was this massive blank canvas just waiting for the perfect project to present itself,” said Blair. “A Ouija world record roof was a perfect match for our place.”

To see the board come alive from start to finish, check this out:

Interesting, yes. But my readers know how I feel about Ouija boards. If I lived in this neighborhood, I'd be calling my realtor about now.
Email ThisBlogThis!Share to TwitterShare to FacebookShare to Pinterest
Newer Post Older Post Home