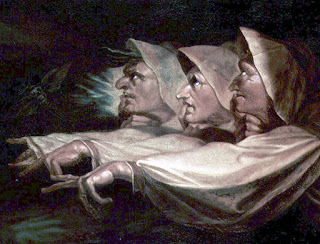 Last month a group of New York City witches gathered at Catland Books, an occult bookshop in Brooklyn, to put a hex on President Trump, members of his administration, and his constituents. This was different than the “binding spell” put on him by witches in February, explains self-described "transgender wolfqueen witch-goddess" Dakota Bracciale. The binding ritual was intended to stop the President from doing any “malignant works,” but in retrospect, says Bracciale, it was "too loving, light and soft." Hence, the hexing ritual, which actively wishes harm upon the targeted person. Bracciale claims the spells are working: just look at the disarray, scandals, and setbacks the administration has been suffering in recent months. More anti-Trump rituals are planned, and it sounds like they will continue until they achieve their ultimate goal of impeachment, or worse.

Okaaaay then. Here’s what I want to remind anyone who thinks this is a good idea. Spells, curses, hexes -- they backfire. It’s the ultimate case of “be careful what you wish for.” In my book Evil Unleashed, I have a chapter devoted to the travails of a young man who was victimized by a witch’s hex. This isn’t Bewitched, friends. This is serious stuff. Being on the receiving end of a hex can bring misery, suffering, and death. And for those doing the hexing? Well, pretty much the same.

Fr. Herman Jayachandra, a priest with extensive exorcism experience in India and the United States, and who has had to deal with curses and hexes on both sides of the world, warns: “The devil, after using a witch to the best interest of both, eventually will kill her indirectly, driving her mad so she’ll die quickly in an accident or slowly from not being able to care for herself.”

Of course, witches like Bracciale will say they’re not invoking the devil in their spells; only forces of natures, cosmic energy, thought vibrations, etc., etc. Exorcists who have been in the trenches say that’s a bunch of hogwash: The power of the spells comes from evil forces, pure and simple.

“You are becoming indebted by calling on power not from God and establishing a relationship with that power,” says exorcist, Fr. Patrick (not his real name, for privacy purposes). “If you ask a favor, these spirits don’t want to help you in the long run. If you think they do, you are fooling yourself. . . Evil is not concerned about your freedom; it wants control.”

Reverend Vincent Lampert, an exorcist from the Diocese of Indianapolis, says that those casting spells are relying on evil that feeds on anger and revenge. “The end result of all this for people will be to find themselves more deeply entangled with the devil,” he said. “Their lives will continue to spiral out of control.”

There’s a similar theme in all these warnings: loss of control. The witch may think she or he is doing the driving, but later down the road it will become apparent that they’re just along for the ride -- a ride that will end with a crash if they don’t find a way to escape the darkness.