A particularly disturbing post from Msgr. Stephen Rossetti's exorcist blog. Be careful out there, dear readers. The world has truly become the devil's playground.

I am always surprised when I encounter people who willingly give themselves over to Satan’s service. It is one thing to struggle with temptation and to fall into his grasp through sin. It’s another thing to willingly choose to follow him.

The Father of Lies would like nothing better. At Satan's own defection, he sought to be god and wants people to serve him. Thus he tempted Jesus, "All of these [kingdoms of the world] I shall give to you, if you will prostrate yourself and worship me" (Mt 4:9).

These past few weeks (see Diary #140), we have directly encountered a Satanic cult.* They have been recruiting followers by threats and coercion. They have been actively cursing and manipulating young women. We have been supporting one who is valiantly resisting. Several Satanists have been arrested, but there are more at large

(Read the rest of the article here.) 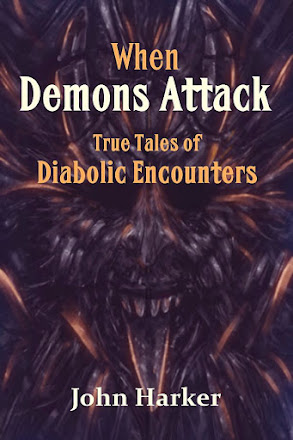 Was hoping to get this out sooner, but last year was, shall we say, a bit devilish.
Anyway, better times lie ahead. And what better way to welcome warmer weather, sunny skies, and blossoming flowers than with a big dose of DEMONS!
Yep, this True Tales book is the biggest yet with incredulous accounts of hideous manifestations, depraved assaults, and all other manner of frightening paranormal phenomena.
As with all True Tales books, When Demons Attack strives to inform, entertain, and enthrall. But most of all, to warn.
These creatures are real. They walk among us. They never sleep.
After reading this book, you may not either.
* * *
The official release date of the ebook is April 5, 2021. (With print and audio TBA.)
Pre-orders are available now at Amazon. Check it out!
Posted by John Harker

Eyes of a Demoniac

Msgr. Stephen Rossetti is an exorcist as well as an associate professor at The Catholic University of America. He writes a fascinating blog called the Exorcist Diary from which the following post comes. Oh, by the way, this photo is the real deal.

Sometimes it is difficult to determine if a person is possessed or the problems are psychological only. But other times, it is obvious. [Click to read the rest of the post.] 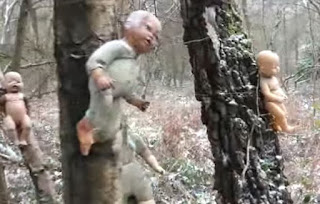 Video: Eerie 'Doll Altar' Found in England: A woman walking through a wooded area in England stumbled upon a rather unsettling scene in the form of an eerie collection of baby dolls that had been fastened to trees as part of what appeared to be a makeshift altar.

New Fiction in the Frost Zone 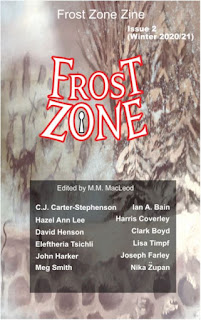 Reporting something a little different in this post. Over the years, under different pseudonyms, I've written a number of short stories that have appeared in various online and print publications. I plan on actually releasing a collection of these works sometime next year. Most recently, I've had a short-short story published in the Winter issue of Frost Zone, a relatively new journal of speculative and literary fiction. In its two issues to date, Frost Zone has featured some stellar stories and poems, and is a welcome addition to the world of dark and eerie literature.

So grab a cup of something warm, wrap a blanket around your shoulders, and head over to the Frost Zone. Consider my story, "The Dinner Party," an appetizer for a main course of reading delights. Enjoy.

Rosenheim Mansion in Los Angeles, aka Murder House from the first season of American Horror Story, has quite the spooky reputation apart from its spotlight role on the cinematic screen. This article from Toofab.com explains all the devilish details. Happy Halloween. 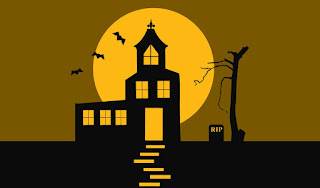 "I know they did an exorcism here ... but I know that it didn't work."

While the Rubber Man or freaky Infantata may not be roaming the walls of the home used for "American Horror Story: Murder House," its real-life residents claim there's still plenty to be spooked about while living on the property.

And this weekend, they're opening up its doors to the public for the first time -- giving a few lucky fans the chance to sleep in the basement of a house they insist is very much haunted off-screen, too.

Demonic Doings on the Devil's Night 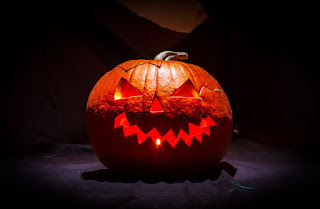 Take a wild guess which holiday is an exorcist’s least favorite?

Msgr. Stephen Rossetti, chief exorcist for the Archdiocese of Washington, D.C., recently wrote on his blog:

“I am starting to prepare spiritually for All Hallows' Eve. No bags of candy. No costumes. No pumpkins. As every year, it'll be ugly.

“Many of our spiritual sensitives will get pummeled by demons. One year, our team decided to pray over one of our most gifted throughout the night, trying to shield her from the demonic attacks she yearly suffered. It didn't work. She got pummeled anyway. But she said she appreciated our efforts.

“Several of our other sensitives will experience increased demonic harassment. Many of our clients who are possessed or severely oppressed will suffer more intensely throughout the night. The priest-exorcists themselves will typically get bombarded with demonic obsessions and an internal battle.”

Msgr. Rossetti goes on to explain that what helps fuel the demons’ power on this particular night are stupid humans (my description, not his.)

Of this species there is, unfortunately, no shortage. There are the zealots – the witches, warlocks, and satanists – who busy themselves on this high holiday of theirs with spells, curses, black masses, and all other sorts of depraved evil behavior. And then there are the dabblers, those who think it might be fun to try out a Ouija board or go ghost hunting, since, after all, it’s Halloween. And last but not least are the unwitting. These are the poor souls who allow their children to dress as devils or other occult figures, go to absurd lengths in decorating with grotesque and horrific imagery, or perhaps themselves wear sleazy, overly-sexualized costumes to parties (the naughty nurse, etc.).

Now, not all exorcists are complete fuddy-duddies about Halloween. Father Vincent Lampert, an exorcist in the Archdiocese of Indianapolis, believes it’s still possible to have fun without selling your soul to the devil.

“Ultimately I don’t think there’s anything wrong with the kids putting on a costume, dressing up as a cowboy or Cinderella, and going through the neighborhood and asking for candy; that’s all good clean fun,” Fr. Lampert says.

Even a sheet with some holes cut in it as a ghost is fine, Fr. Lampert says. The danger lies in costumes that deliberately glorify evil and instill fear in people, or when people dabble in magic and witchcraft, even if they think it’s just for entertainment.

London exorcist Fr. Jeremy Davies expands on this thought. “They [those who “celebrate” Halloween] begin by playing games, but it can lead to people disbelieving in the devil and evil spirits.” In his view, this disbelief can be just as bad as believing, and that levity about such matters could be fatal. “Playing with evil under the pretext of it being untrue is to allow evil to enter.” Evil can also enter, he explains, where there exists an unhealthy interest in the occult. Whichever way evil gains entry, Father Davies is clear that any dabbling in the occult “doesn’t have to be deep to be deadly.”

In short, I think the universal adage for 2020 applies particularly well for Halloween this year: Be careful and be safe.

And  keep some holy water close by.

Thoughts from a Catholic Exorcist 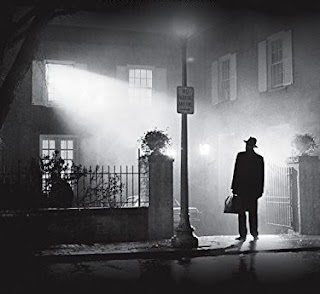 Michael H. Brown, author of Lying Wonders, Strangest Things, recently published a fascinating interview with a Midwestern Catholic exorcist who, for reasons that are clear at the outset of the article, prefers to remain anonymous. Please take a few minutes to read this interview. There are some very interesting insights into the nature of evil, the reality of the demonic, and how to protect yourself from it.

Exorcist: Satanists Have Cursed Me
Posted by John Harker 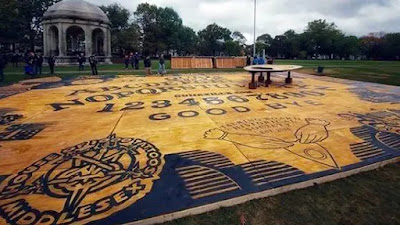 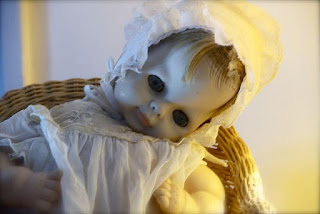 “These dolls aren’t for entertainment or fun. These are actual haunted items with spirits attached who want to be respected. Then you have those who, if you’re not careful, are demonic and ready to tear into your soul.” (Kevin Cain)

Interesting article by Sabrina Maddeaux on msn.com on the latest goings-on in the haunted doll trade. Would I ever bring one of these little lovelies into my home? Not on your life.

Enjoy the article but please don't let curiosity get the better of you. Caveat emptor.

Inside the Haunted Doll Markets of eBay and Etsy

Thirty years ago, the world was introduced to a 29-inch-tall doll in overalls named Chucky. With eyes bluer than a White Walker’s, hair more fiery than Ed Sheeran’s, and a smattering of freckles à la Emma Stone, he looked like the perfect childhood buddy.
Unfortunately, Chucky, the tiny antagonist of the 1988 movie Child’s Play, was possessed by a serial killer with a knack for slaughtering people with butcher knives, yo-yo strings, and anything else he could find around the house. Today, almost everyone knows that if a wild-eyed doll asks, “Wanna play?” the only acceptable response is to run as fast and far as you can.
Then there are people like Kevin Cain, a paranormal investigator in Alabama who owns hundreds of haunted dolls and other items. “I lost count a long time ago,” he says. While Cain may be an especially prolific collector, he’s far from the only one. In fact, there is a thriving marketplace for haunted dolls on the internet.
Link to the rest of the article.
Posted by John Harker