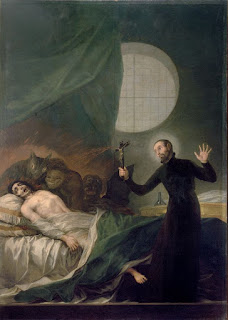 Okay, I know this isn't exactly the most uplifting headline for a New Year's Day post, but it could lead to a slew of resolutions for some of us. (Note to self: Try not to get possessed.)

Word on the street about a shortage of qualified exorcists has been spreading for quite some time. Ask any exorcist (if you can find one) if they’re busy, and they’ll no doubt tell you they’re swamped. It might not just be full-blown cases of possession they’re dealing with, but hundreds of other devil-and-ghost-related concerns like hauntings, infestations, oppressions, and, of course, mental illness and addictions.

Last October at the International Association of Exorcists conference, 400 Catholic professionals met to strategize about this very topic: how to recruit and train more exorcists. The Rev. Vincent Lampert, the pastor at St. Malachy’s in Indianapolis, Indiana, and a diocesan exorcist, was one of the attendees. Lampert says the situation is more dire than ever because rampant Internet pornography, illegal drug use, and growing interest in the occult have made it easier for Satan to cast his net.

“Exorcism is like triage. We’re the emergency crew — but there aren’t enough of us,” Lampert said in a recent interview with the New York Post.

Things are even more out of control across the sea. The Rev. Vincenzo Taraborelli is a 79-year-old priest in Rome who says he is too afraid to retire.

“I told the bishop that I can’t find anyone willing to do this. Many of them are scared. Even priests can be scared. It’s a difficult life,” says Fr. Taraborelli, who says he treats up to 30 people a day in the back of his church.

Board-certified psychiatrist, and believer in diabolical possession, Dr. Richard Gallagher has also been in the news of late for calling on religious practitioners to be alert for what he calls “a rapidly growing worldwide phenomenon.”

Evil is out there, folks. Be safe in 2017. Take care of yourselves in body, mind, and spirit.