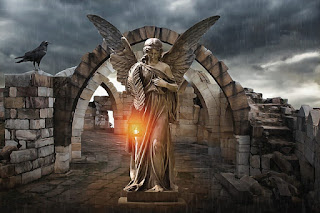 Much of the time this blog discusses instances of dark, eerie, and evil matters. It tends to make us forget, I think, that good also exists and is ever more powerful. I ran across a story today that reinforces that belief and illustrates beautifully that agents of good—beings of light—are with us always. In the Christian church, as well as others, we call these beings angels. And in honor of their feast day today (October 2nd), I’d like to give them a little attention with this fascinating narrative as recounted by magazine writer Robert Reilly:

There are some true believers, of course. A Creighton University Jesuit named Father Francis Deglman used to fascinate me and other students with his recital of encounters with his personal angel. He carried on a spirited discourse with this being--argued even, and complained.

His most dramatic episode occurred early one morning when he was awakened from sleep.

Father Deglman glanced at his alarm clock. "It's 3 in the morning," he managed to object. But he arose. The guardian angel instructed him to turn on the light. Reluctantly he fumbled for the wall switch.

Deglman shook his head, plunged the room into darkness again, and crept beneath the solo blanket, still wondering what this was all about.

The next morning a student came to see him.

"Father," he began, "last night I was thinking of taking my life. I tried to get into the campus church but it was locked. It had to be about 3 o'clock. I sat on the wall outside the Jesuit residence, certain that God didn't care if I lived or died. Then I said, 'If there is a God, let a light go on in that building.' I looked back up and your light was on." *


The light is always there for us. All we have to do is ask for it.


* As published in U.S. Catholic magazine.